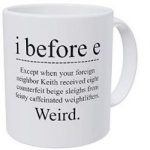 Is this a spelling “rule” you recall from your childhood? It’s one that many of us can rattle off, but perhaps you’d be interested to know that there’s more to it…

It’s not just “i before e”, with a whole lot of exceptions. The full rule is:

i before e except after c, where the sound is ee
This is why at Smart Achievers we teach:
Otherwise, your child will have to over-rely on just memorizing words, thousands of them.

If they learn using the above four areas then English becomes fascinating and incorporates a lot of history. Personally, I think these mugs should be binned as they can imply that English is random and crazy and it isn’t.

Go the extra mile and think about the spelling of a word. It will pay off.
– Julie

This site uses Akismet to reduce spam. Learn how your comment data is processed.